We're excited to invite you to join our DARP network. 🚀

Prerequisites to run a DARP node

A quick checklist to make sure you're all set to run a DARP node:

Be wary of cloud costs

Light DARP version (without a local UI) consumes up to 4 times less bandwidth.

Set up your DARP node

DARP nodes are distributed via Dockerhub, source code itself will be open-sourced soon.

You can opt for either the DARP Node containing the UI, or the light node which doesn't provide you a local UI. They are completely equivalent, so choose the one you prefer!

Kudos to our absolutely the best community and Luciano for producing this video.

Join our developers' community in Discord! Navigate to a relevant channel (#darp_support_linux or #darp_support_windows) and seek community support there.

As always, be respectful and help others if you can.

You can simply use localhost or a combination of Your Docker IP:Port in the browser address field. Usually Port 80 is used here. If the host IP is used, then it depends on which port the Docker port 80 is exposed to.

The UI is pretty simple - we have a constantly pulsating matrix of nodes and some filtering options.

There are three ways to read Matrix:

This section is all about the improvements. Every colored tile represents the potential gains DARP finds by routing packets through some relay.

Clicking on a specific cell shows the detailed information about the connection - direct latency, routed latency and the resulting gains. It also shows the best route with the relay node. 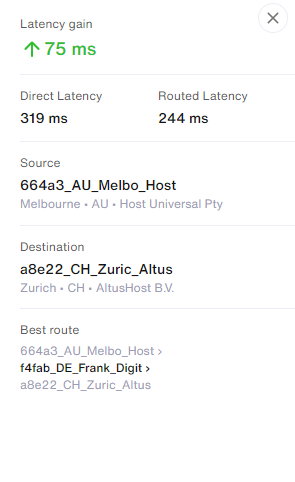 Connections that cannot be improved, or improved by less that 10ms (which at this stage we consider a marginal increase and don't account for), will be represented by white cells.

This is the most basic piece of information - here you can see the actual latencies between nodes, also separated by the color intensity - the lighter it is, the better.

Red cells represent connections for which packets cannot be sent and received directly. There can be multiple reasons for it, which require detailed investigation for every separate case.

This is the latest addition to the analysis setup of the matrix and allow you to actually 'stand in the shoes' of a node to understand how much it could optimize the connections of the current DARP group.

You can select the node in the upper left dropdown to see the improvements where it could contribute.

Even though the node can improve a lot of connections, so do the other nodes. You can tell where the selected node is absolutely the best by looking for bright green cells or applying a filter.

Matrix can be overwhelming, so you can also opt for a table view for a specific node and its connections.

There you can see the destination nodes, direct latency, gained optimizations and the optimal route itself.

To cut through the noise - use filters. You can filter by Country, City or ISP to build a small matrix of the most interesting nodes.

Node Routes section can be filtered by the latency and improvement metrics.

The access is completely free and voluntary at this stage. To simplify access and broaden community participation, tokens will be enabled once DARP is connected with the rest of the tech stack to facilitate route optimizations

In case the Genesis node doesn't receive any packets from the participating node in 60s - that participating node will be removed from the group, so that it would consist only of the active nodes. This isn't a ban though - nodes can always reconnect.

Simple, just go to your local UI and the node that will be picked there in Node Routes section by default is yours.

It should be pretty much immediate. If it isn't - there might be issues that are explained below.

This means your node doesn't have a connection to other nodes. Maybe a firewall is blocking, maybe a different port/NAT session was opened. Check these first and if it doesn't help, jump on to our Discord.

Our current exploratory DARP nature requires us to utilize Docker images for delivery, however, we are continuously working to make it as easy as possible for everyone to join.

Updated over 1 year ago