All of your Networks and Connections can be further managed by either adding, removing, or amending connections as well as the size of the network itself.

You can always add new Endpoints the same way as outlined in the Create your Network part. Simply click on Add End-points and select more endpoints. As you can see, the ones already belonging to a Network are disabled.
New endpoints will appear in the Network graph as independent items, however, would bring along their existing connections with endpoints that also belong to this network. 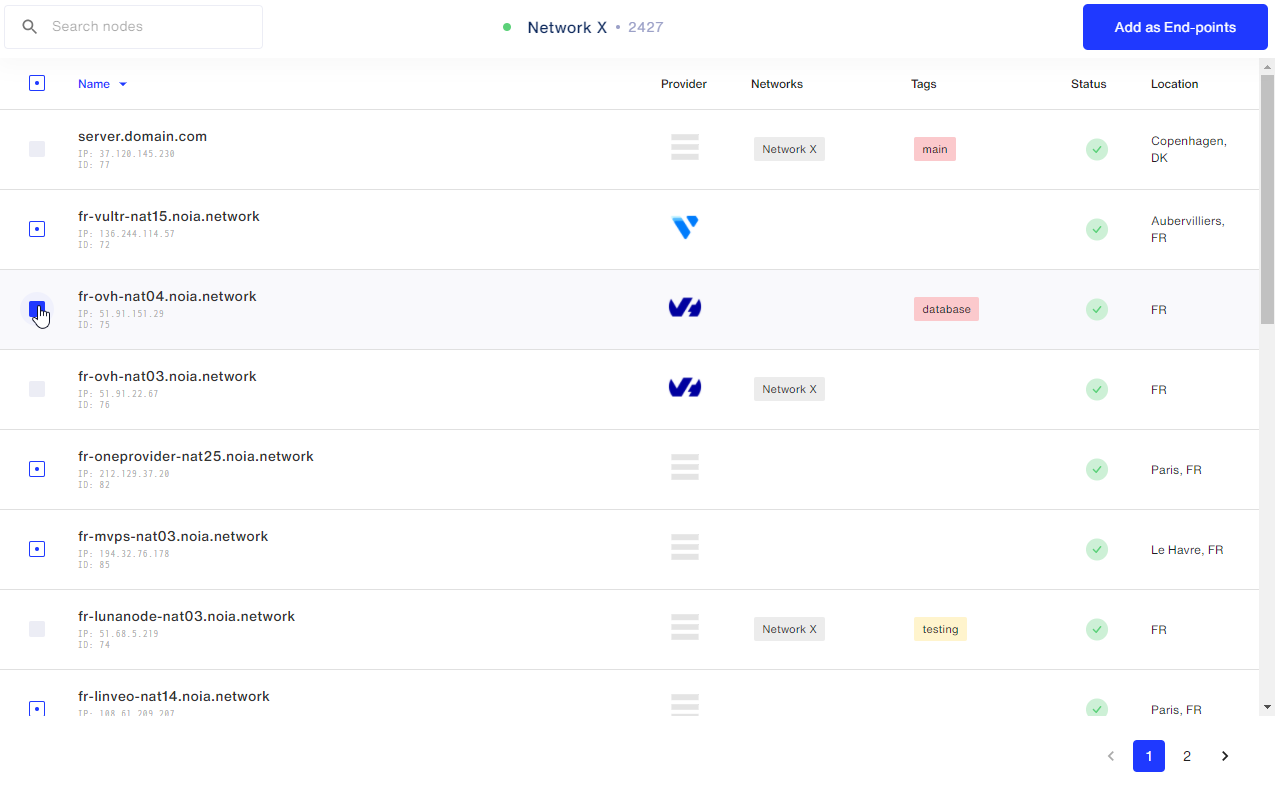 You can click on individual endpoints and granularly amend the connections they belong to. You can both add and remove those.

New connections would be displayed with a dashed line and removed ones would simply disappear to show you a new state of your network which would be done after applying changes. 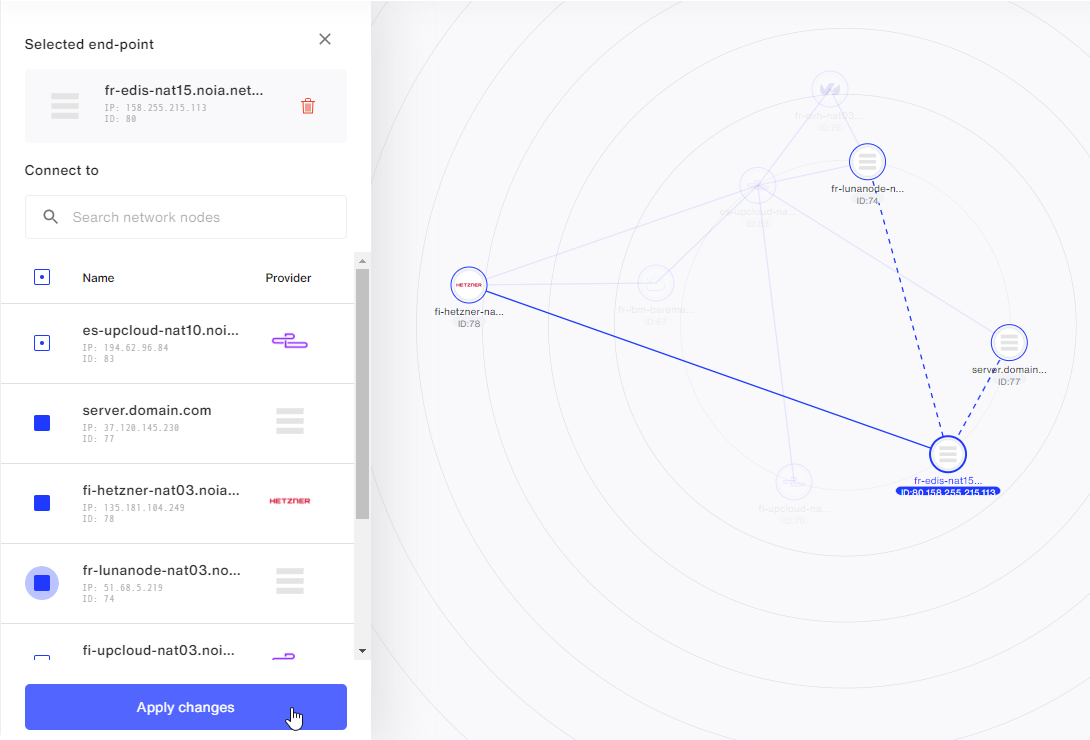 To keep you always informed on the scope of changes we have a secondary confirmation step that outlines both newly added and deleted connections.

Deleted ones require a secondary step of confirmation. 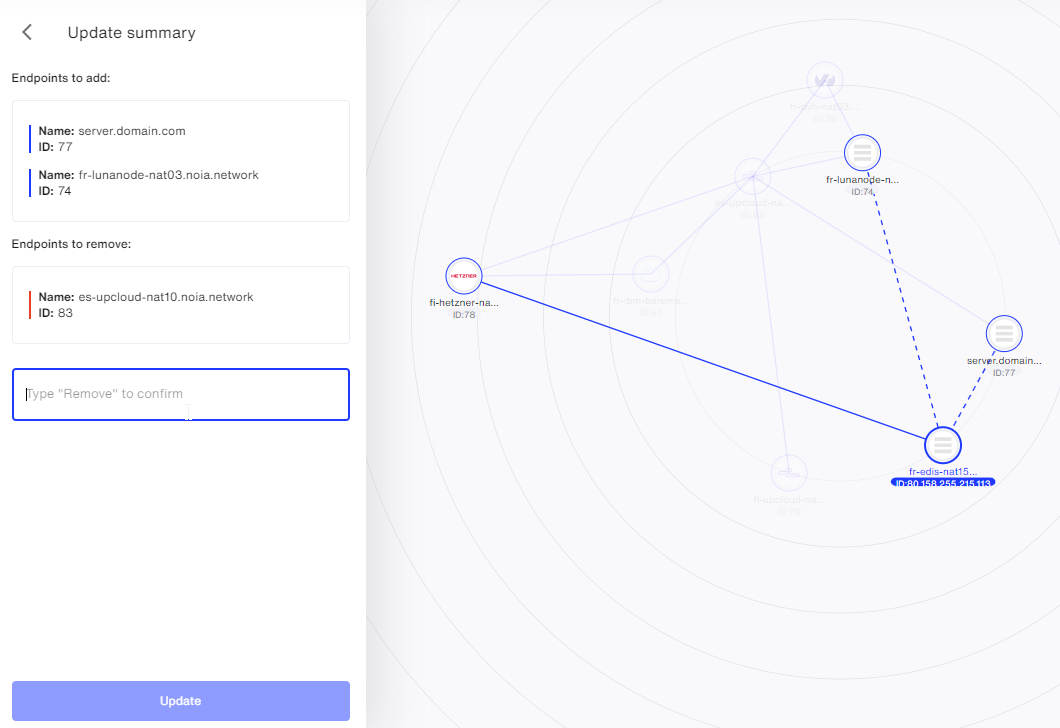 Keep in mind that if the same endpoints are used in other networks, changes done here would reciprocally be reflected there, as well.

It is possible to establish connections with any kinds of endpoints, including Virtual ones.

The difference with connections containing a Virtual endpoint is that they provide a configuration, that's shown as a 'cog' icon in the Network Graph. 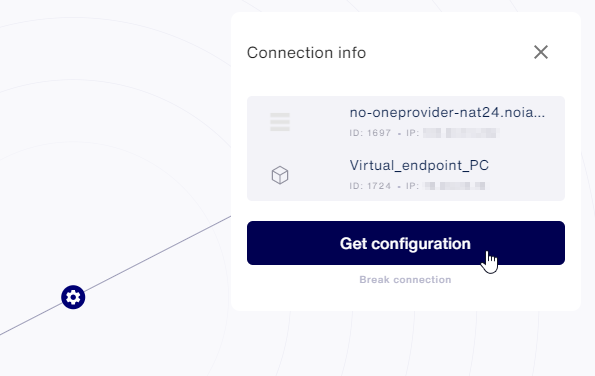 No virtual to virtual endpoint connections

Due to their simplistic, placeholder-like nature, you cannot establish a connection between virtual endpoints. The tickboxes will be disabled.

To control the zoom level of Network Graph, you can use these actions:

Build the network as you wish

Network graph saves the coordinates of the endpoint position whenever you move it. This allows us to always provide you the network graph view as you left it the last time.

Network can not only be visualized in the Network Graph, or seen as a list of connections in the Connections table. You are also able to download a .yaml file outlining the current state of the given network.
Simply click the 'Download .yaml' button above the Network Graph to retrieve a file. 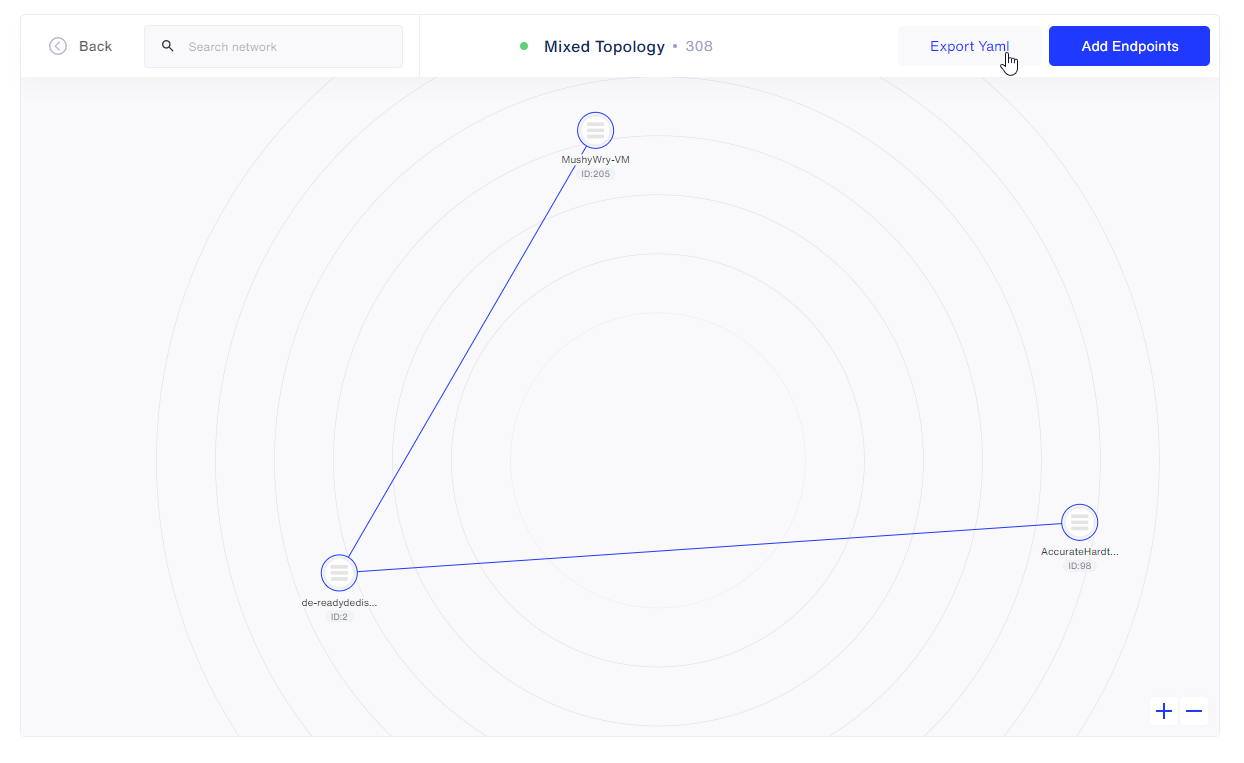 You can further use this file for Network configurations. More information about it can be found in YAML Configurations section

Network Graph isn't the only place where you can see and amend your Connections - there's also a table underneath it outlining all of the existing connections of the network you're currently looking into. 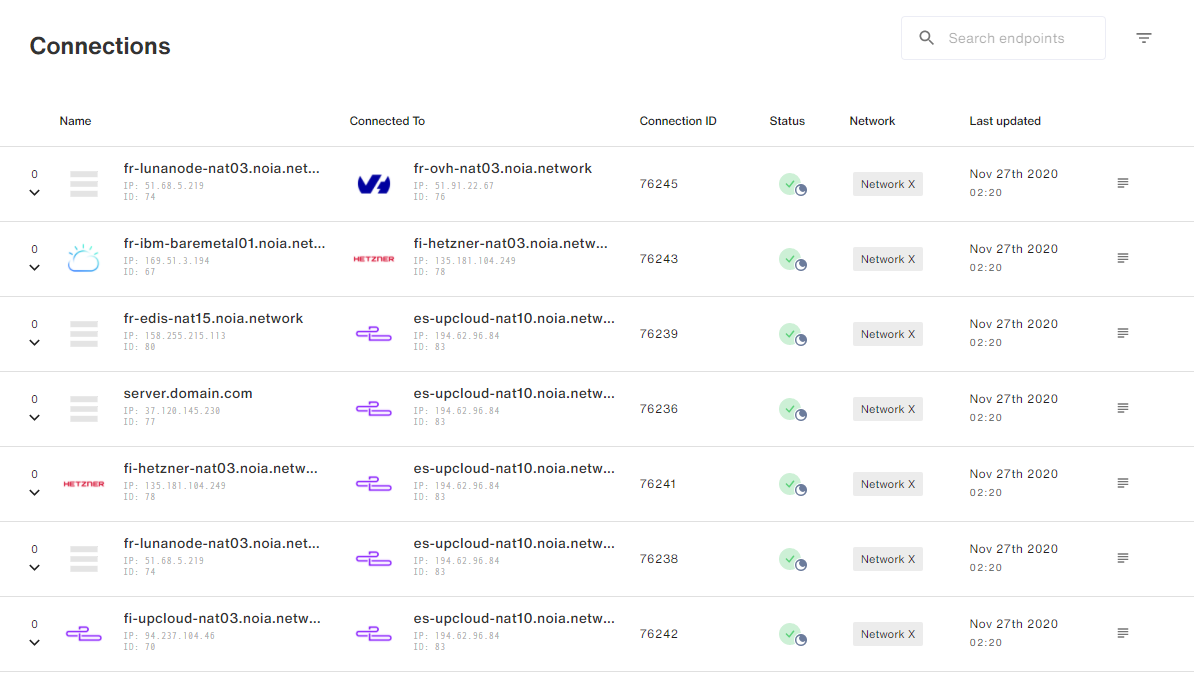 There are five possible statuses that the Connection could have:

Agents are primarily used to configure connections, so after it's done - they can be removed and the connection would stay intact and active. Due to this, it is sufficient to have one active agent that would determine the connection's status.

Sometimes we might not be able to tell the exact current status as there might be periods of time, exceeding 5 minutes for which agents haven't exchanged any messages. We'll mark this as a sleeping connection, which you can see above.

For more information, always hover above the status and check the contents of a tooltip.

Connection statuses are also reflected in the network graph for every connection that has degraded or no connectivity.

As mentioned in the Endpoints section - every endpoint brings its Services and their setup to a Connection. However, this can also be managed on every specific Connection level in the very similar expandable bar as in Endpoints.

Endpoint services are disabled by default (unless specified otherwise in the Agent), so it's always a good idea to re-check specific Connections setup and enable services as needed.

In case of overlap or any connection errors, you will be presented with an error icon by the services facing those issues. After mitigating them (e.g. fixing a connection overlap) you can untick the service and tick again, so the re-configuration could happen.